On 4 May the Swedish National Museum of Science and Technology presented the latest iteration of a series of seminars about different aspects of games and culture this time focusing on the darker side of gaming. 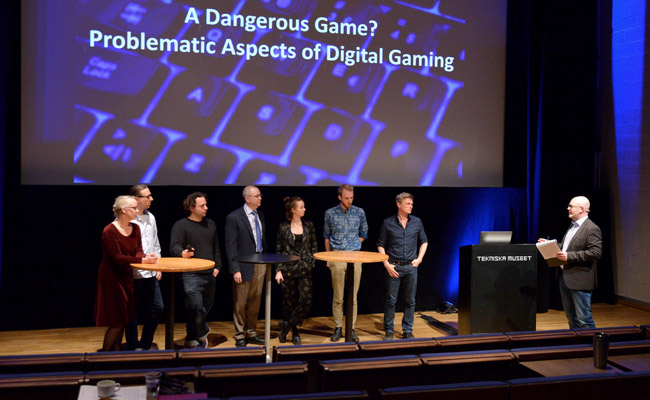 The seminar with the title “A Dangerous Game? Problematic Aspects of Digital Gaming” featured not only well-known researchers from the US and the Nordic Countries but also representatives from civic society like Alexander Hallberg, the head of SVEROK, and Amanda Redin from the Swedish Institute of Law and Internet.

The central topic of the seminar was problematic gaming /game addiction. This is a topic of growing societal concern but also an area where research and politics are in the middle of a controversial discussion around the best way to define, understand, and ultimately treat or prevent problem gaming. The controversy of this discussion was visible in the seminar where there was a real debate between the presenters all of which presented another perspective or aspect of problem gaming.

Douglas Gentile, professor of Psychology from the Media Research Lab of Iowa State University presented the perspective of Psychology and showed his measurements of the link between gaming and aggressive behavior and attitude. This was contrasted by Karin Helmersson Bergmark, Professor of Sociology from Stockholm University, who spoke from decades of experience in sociological addiction research and offered a critical perspective on the concept of addiction and the way it was promoted in the case of game addiction. Our newly hired assistant professor Patrick Prax presented his work taking the perspective of treatment on problem gaming. Patrick explained that problem gaming needs to be understood in the context of the family or social setting it occurs in and warned against overly focusing on the gamer or their behavior when trying to understand or treat problem gaming.
Faltin Karlsen, professor of Media Studies at Westerdals Oslo School of Arts finished with a presentation of game design elements that can lead to problematic gaming and stressed the responsibility of game designers and production companies as well as the need for regulation and best practices in game design.

So: Is there a thing called Game Addiction? The podium discussion was split here. The move of the American Psychologists Association towards a diagnosis of online game addiction was contrasted with the failures of earlier diagnoses like TV or reading addiction and the notion of the recurring moral panic around new media use, the focus on the individual with the problem contrasted with the view on the society and family in which the problems emerge. Despite these often paradigmatic differences all of the presenters here shared a desire to help people in need of support and wanted to get help to problem gamers as soon as possible. This shared purpose emerged as a motivating connection out of a somewhat heated discussion which gives hope for a future where we collectively find the right way to help people to live fulfilled lives with games.

The seminar was filmed and will be available on the website of the Swedish broadcaster UR soon.