A career in games

Ylva Sundström thought that working with games seemed interesting, so she applied to the Game Design and Graphics programme at Uppsala University - Campus Gotland, and received her degree in 2012.
When she applied she imagined a future in game graphics, but during her studies she found that she gravitated more towards the role of game producer. Ylva realised she was good at getting stuff done and managing the complex process of creating a game from scratch without getting stuck in details, skills that are essential for a producer.
At the moment she works as an Art Producer at Gameduell in Berlin. 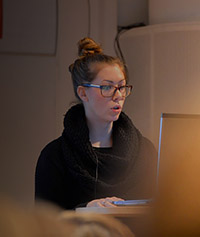 Tell us something about yourself and your background?
I’m 31 years old and I grew up in Tyresö in Stockholm. Prior to applying to university I hadn’t really considered working with games. I knew I wanted to do something creative, but I was unsure of what exactly.
When I was 24 I decided to apply to a few game degrees in Sweden, and when I was accepted I started studying Game Design and Graphics on Gotland. I had already completed two short courses related to the field and found them interesting.
Once I had finished my studies I started working as a game producer at Zeal on Gotland, and now I work as an Art Producer at Gameduell in Berlin.

What made you choose game design?
I’m not sure. I thought it seemed different and interesting. I didn’t have a clear understanding of which part of making games was the actual game design until I studied game theory.

Why did you choose Gotland?
I loved the idea of living on an island. I had visited Visby a few times and knew it was very picturesque. Compared to other places of similar size Visby somehow felt like a city.

Do you have any advice for readers who are interested in working in the games industry?
Try a few different things before deciding on exactly what it is you want to do. Working in games can mean so many different things, it’s a diverse and constantly evolving field. Be prepared to work long days!

What types of challenges have you encountered in your work?
Making sure there are enough open discussions around game design and allowing them to influence the game throughout the process can be challenging, especially since it’s important to not loose the overall vision for the game.
You always want the game to contain unique and interesting components and you want the experience of playing the game to be as fun as possible for the user - or even better, fantastic. But it’s hard to know which ideas and features are worth spending time and money on.

The game design is the most difficult part in my opinion. My job is easy. Just tell me what you need and when you need it by, and I will plan it all out. But as soon as changes start happening during a project it’s easy to loose track. At the same time you don't want to make games by following some sort of template.

Is there a particular game you wish you had worked on?
I think I’m more interested in the team than the game. It would have been amazing to see how they work at Bungie. I’ve played the early Halo games a lot and they have given me some of my best gaming experiences. I believe and hope that comes from a strong and passionate team.

Watch Ylva’s presentation on her work at Gameduell, filmed during our Alumni Days 2015.

Watch more presentations by former students about their careers after graduation.